English for the many or the few

Posted on September 23, 2015 by reclaimschools

Many of their ideas derive from a series of pamphlets known as the Black Papers (1969) – a frontal attack on progressive education. The writers suggested that child-centred teachers were too concerned with ideas of personal growth to bother about ‘standards’. 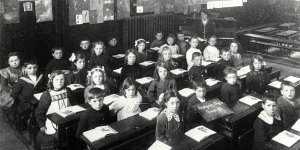 These Conservative thinkers argued that English should be about teaching a fixed body of knowledge: re-establishing the pre-eminence of the English Literary Heritage, and the explicit teaching of grammar and Standard English. They argued that ‘standards’ would only be maintained if they were clearly and publicly defined, hence the need for tests and league tables.

This chapter by Valerie Coultas (Kingston University), English for the few or for the many, explains their fixation with phonics, grammar, Standard English and assessing writing by exams, as well as their nationalistic stance on the English literary heritage. She points out some of the myths in the nostalgia-laden Conservative argument, along with their deficit view of working-class culture and language, and argues for a more democratic basis for English teaching.