Posted on February 3, 2019 by reclaimschools

Rumours are circulating that schools in poor areas will stand a better chance of getting a good Ofsted grade, but where is this coming from? There are no such promises in the new draft Inspection Framework. In fact, page 11 shows that test results remain an important consideration, as part of the judgement about Quality of Education.

Ofsted’s hit and run approach to inspection – sending total strangers into a school to make a judgement in just two days – means they will continue to rely heavily on test and exam data accessed before they start. The inspectors simply don’t have time to do otherwise. Just a third as many person-days are allocated to inspections as in the 1990s, Ofsted’s first decade.

We need to question whether inspectors are capable, within such a short time, of tuning in to the positive work of teachers and their relationship with children and their families. When four inspectors have only two days to inspect a large secondary school, they can only skim the surface. The hit-and-run approach includes observing only fragments of lessons and skimming through a few exercise books. With the best will in the world, Ofsted will continue to pre-judge schools on the basis of the data.

A fairer system in the future?

The story of a fairer approach to inspection seems to originate with a BBC website journalist, rather than any senior Ofsted official. On 16 January, reporter Judith Burns wrote:

A school in a tough area which has great teachers and a great curriculum could be rated outstanding from September, even if pupils’ results are mediocre, says Ofsted.

This exact sentence was copied by dozens of other media outlets, but the BBC reporter gave no source. Later she quotes Ofsted’s director for education Sean Harford on schools that game or cram and achieve good results by narrowing the curriculum, but includes nothing to support her opening sentence.

Even if the quotation did come from an authoritative source, the word ‘mediocre’  betrays a terrible contempt for these schools. The pupils and teachers will have worked their socks off to achieve the best possible results – results which are a fantastic achievement, even if they’re not as good as the A*s in more privileged schools.

Ofsted are desperate to rebrand themselves, and maybe Judith Burns is quoting one of their spin-doctors. Instead of rumours of change, we should look to Ofsted’s record. 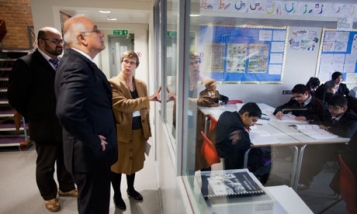 The record so far

Ofsted judgements are strongly tied to social conditions. This is a longstanding problem, and has got worse. Ofsted themselves analyse data by dividing the total number of schools into five equally sized bands (quintiles), according to the percentage of pupils with free school meals entitlement.

The bias is even worse in areas with mainly ‘white British’ populations, typically deindustrialised areas and derelict coastal towns. GCSE candidates with English as an additional language (EAL) tend to make better progress at secondary school than others, when compared with their KS2 test scores. This is because many of them are still at a relatively low stage of English at the end of primary school but take off during secondary. This is clearly reflected in Progress 8 scores, with EAL pupils making well above average progress compared with the whole population.

The reasons why ‘white British’ pupils suffering from poverty don’t do as well at school are nothing to do with ‘whiteness’. The data indirectly reflects longer-term poverty, limited prospects and the demoralisation of living among the ruins of deindustrialisation.

We need to question whether Ofsted are capable, in a two-day inspection, of tuning in to the positive work of the school. When four inspectors have only two days to inspect a large secondary school, they can only skim the surface. With the best will in the world, Ofsted will continue to pre-judge schools on the basis of the data.

This can also be exacerbated by an inspector’s lack of personal experience of teaching in disadvantaged areas and feelings of discomfort when confronted with the effects of poverty.

When York headteacher Trevor Burton matched Ofsted grades with other data, he found a close link for secondary schools was with pupils’ prior attainment.

Using the system operative at that time (June 2014), he discovered that all schools inspected in the past six months with an APS of 30-33 were found Outstanding, but very few schools with an APS of 28 or below. (The two columns on the left are insignificant, as they involve only 5 schools). Even the drop from 30 to 29 halves the proportion of Outstanding grades.

Not surprisingly, his conclusion is: if you want an Outstanding, choose the right pupils.

Much of the data in this  report was obtained from Ofsted by Stephen Tierney for the Leading Learner blog. We are very grateful for this important investigation.