Posted on November 30, 2019 by reclaimschools

The Conservative Party are constantly claiming to have improved schools, but without reliable evidence.

They claim that more pupils are being educated in ‘good’ and ‘outstanding’ schools. The Ofsted data is suspect, since the criteria have been changed so much. Once a school is judged Good or Outstanding, it escapes thorough inspection for many years, which automatically leads to an upward trend in the data.

For GCSE grades too, Conservative ministers have gone to a lot of trouble to cover their tracks. A* was the highest grade, but 1 is now the lowest. Fair comparisons are impossible.

One piece of hard data is the number of pupils in oversized classes. It was due to the actions of teacher unions in the past that class sizes were brought down from around 40. Teachers were encouraged to stand firm and fight for an extra teacher, rather than allow children’s needs to get overlooked in too large a class. 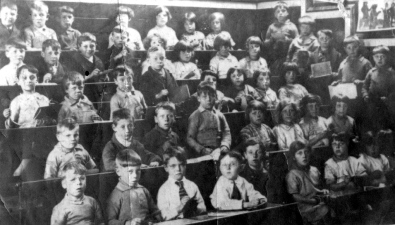 Careful scrutiny of Department for Education data shows the situation has got much worse since the Conservatives (with Lib Dem support) took control in 2010. In the first year of Conservative rule, 11.7% of primary school children were in classes over 30. Now it is 13%. The deterioration was even worse in secondary schools: from 10.2% of pupils to 13%.

Expressed in percentages, the change might not seem so great. When you look at the number of pupils, you see the betrayal of hundreds of thousands of children and young people. Over 1,000,000 of primary and secondary pupils are being taught in classes above 30 – nearly a quarter of a million more than in 2010. The ratio has got worse, and not enough teachers have been employed to keep up with a rising birth rate.

According to OECD data, class size in UK primary schools is now the worst in Europe.

It is all very well for Boris Johnson’s education minister to promise extra funding on the eve of a General Election. The proof of the pudding is the last 9 years. Despite all the government’s cant about ‘aspirations’ and ‘social mobility’, the school experience of state-funded pupils / students has deteriorated.

Let us compare this to Boris Johnson’s old school, Eton. According to its website Eton’s pupil-teacher ratio is currently 8:1 – and this doesn’t include the 70 visiting music teachers.  Johnson doesn’t have a clue about life in state schools.